SK Telecom today announced the introduction of a new technology for the next generation Wi-Fi that can deliver speed as fast as 5G technology.

KT to offer free 'Wi-Fi roaming' in China and Japan

KT announced last week that it will be offering 'Wi-Fi roaming' service 'at all time and at no charge' to its customers who travel in Japan and China.

SK Telecom today announced that it has been named the winner of the “Best Wireless Deployment in Rural or Remote Areas” with its ‘Smart Wireless Backhaul’ at this year’s Wireless Broadband Alliance (WBA) Industry Awards* held on November 16 in San Jose, California.

Paul Kyungwhoon Cheun, Executive Vice President and Head of the Next Generation Business Team, explains the company’s most recent 5G developments and what the future of mobile communications has to offer.

SKT to offer 500Mbps – Fastest speed by LTE so far

SK Telecom announced its plan to roll out 500Mbps LTE service starting June, and achieve 1Gbps, relying on LTE only, through 5-Band CA (Carrier Aggregation) in 2018.

Daliworks, a Korean IoT platform service company, today announced that it is integrating its Thing+ Cloud platform onto the QCA4002 Wi-Fi® solution and development platforms from Qualcomm, creating added value for devices that use Wi-Fi to connect to the Internet of Things (IoT).

SK Telecom announced today that it has been chosen as the winner of the “Best Wi-Fi Network Infrastructure” with its ‘Cloud AC (AP Controller)’ at the 2015 Wi-Fi Industry Awards* held on October 14 in San Jose, California. 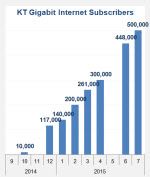